Seventy-six animal species including mammals, reptiles, amphibians and fish are under threat of extinction, according to Iran’s Department of the Environment. 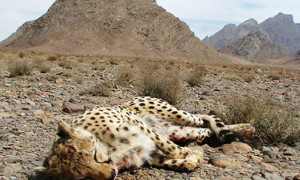 The department’s director of Biodiversity and Wildlife told ISNA on Sunday August 23 that 30 of those species are now high priority and “an action plan to save them has been prepared or is under preparation”.

In less than 100 years, numerous animal species such as the Iranian lion and Mazandaran tiger have become completely extinct.

The Asiatic cheetah, now found only in Iran, is considered to be under critical threat of extinction, and several mammals including the Iranian Yellow Deer, the Asiatic Zebra, the Caspian Seal and the winged whale are severely endangered.

The report adds that actions to rescue the 30 endangered species and 15 that are close to extinction will be implemented in the coming year or two.

Implementing the plan is reportedly conditional on receiving adequate funding, according to the department spokesman.