Macedonian police have prevented thousands of asylum seekers from entering their country, holding them back from the border and stranding them in severe rain. 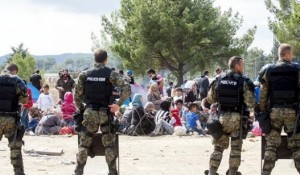 The Associated Press reported on Saturday August 22 that with an unprecedented wave of refugees pouring into the EU, many migrants including thousands of women and children remain without shelter now that Greece and Macedonia have closed their borders to them.

Only a handful of Syrian mothers and their children have been allowed to cross the Macedonian border, and the rest spent the night in the cold rain with their scant supplies.

The asylum seekers are traveling from Turkey on their way to Europe and are trying to cross through Macedonia en route to Serbia, only to now be held behind barbed wires at the Macedonian border.

On Thursday August 20, the Macedonian government announced a state of emergency to “confront the immigration crisis”. Yesterday, Macedonian police opened fire on the immigrants, wounding at least 10.

Human Rights Watch has called on Macedonia to refrain from using violence against the refugees.