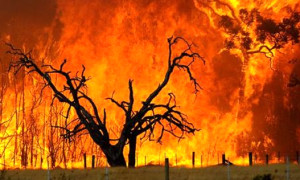 IRNA reports that the fires consumed large sections of the Gilan Gharb Forest starting at noon on Thursday August 20 and continuing for nine hours before they were put out.

Damages to Gilan Gharb have been estimated at three billion rials. The forest has suffered 11 fires in the past month which caused 60 billion rials in damages.

The fires in Sardasht burned for four hours before being brought under control.

The Sardasht Forest covers 80,000 hectares of Western Azerbaijan and is considered the start of the Zargros forests.

Forest fires have become more and more prevalent in recent years, causing serious damage to the country’s natural resources, which are already under stress due to a widespread decline in precipitation and water shortages.