Iranian Parliament has elected a 15-member commission to review the draft of the nuclear agreement reached between Iran and the 5+1 in Vienna last month. 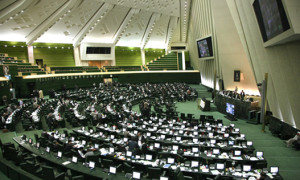 On Wednesday August 19, the 15 members of the commission were elected by secret ballot in Parliament from among 24 MPs who had nominated themselves for the task.

Iranian Parliament has been adamant that it has a responsibility to review the draft of the agreement and examine its outcomes.
There is still widespread disagreement on whether Parliament’s consent is needed to ratify the agreement.

Yesterday, August 18, the spokesman for the government said the agreement will be offered for approval to the Supreme Council of National Security and executed after approval from the Supreme Leader, and sending it to Parliament is “unconstitutional”.

Meanwhile, the U.S. Congress is reviewing the agreement and is set to put it to a vote in September.

Iran’s Supreme Leader said earlier that the fate of the agreement is still unknown as it remains subject to approval by political bodies in the U.S. and Iran.