Nine Iranian trucks and a bus were targets of attacks by armed assailants or set on fire in Turkish territory, Director General of Iran’s Transit and Border Terminals reports. 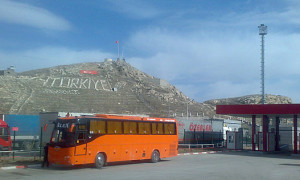 The Open University News Agency reports that Mohammad Javad Attrchian, that the only fatality in these attacks was the death of the bus driver.

o group has yet claimed responsibility for attacks on Iranian transportation vehicles.

A recent report says the Turkish ambassador to Iran has been summoned regarding these attacks, adding that Iran has demanded security for Iranian drivers and damages for the recent attacks have also been discussed.

Since the suicide attack in Suruc, which killed 32 leftist activists and injured 100 others, the Turkish government has arrested more than 1,300 dissidents.

The Turkish government has also been bombing PKK targets in Turkey and Iraq, claiming the group has stepped up terrorist activities. The government blames the PKK for some of the recent attacks, but so far the Kurdish group has not claimed responsibility.

Russia set to deliver missiles to Iran when sanctions fall