201 Iranian MPs have urged the government to immediately forward the nuclear agreement to Parliament in the form of a bill. 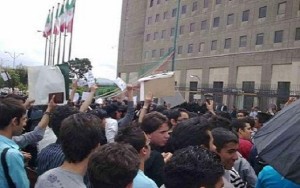 The MPs base their demand on Articles 77 and 125 of the constitution, which establish the need for Parliament’s ratification of international agreements.

Meanwhile, scores of people opposed to the nuclear agreement between Iran and the 5+1 gathered in protest in front of Parliament, calling on MPs to monitor the government’s actions.

Since the announcement of the nuclear agreement in Vienna last month, there has been disagreement over the role of Parliament and the Supreme National Security Council in reviewing the agreement.

The administration has so far resisted presenting the agreement to Parliament, and Ayatollah Khamenei has so far not taken any firm position in this regard.