Close to one hundred municipal service and green space workers have been laid off in Boroujerd. 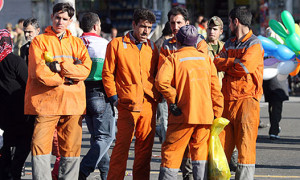 ILNA reports that the workers have an average seniority of between 10 and 15 years and they have not been paid any wages for the past two months.

The report adds that the layoffs are aimed at easing pressure on the city budget. Employees are concerned that the city is looking at a gradual layoff of 800 employees and they have therefore gathered in protest in front of the governor’s office to demand job protection.

Boroujerd city officials state that the decline in development projects has severely limited the city’s ability to pay wages.

In the past year, several other cities such as Zabol, Behbahan and Ahwaz have had trouble paying their employees’ wages on time and have faced labour protests.