An explosion on Thursday August 6 at a mosque in Saudi Arabia killed 14 people. 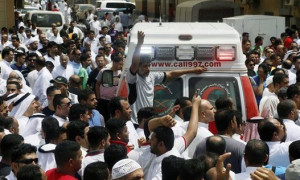 Al-Arabiah quoted the Saudi interior ministry saying that the bomb targeted the mosque frequented by security forces in Abha near the Yemeni border.

Arab News reports that more than 60 people were wounded in the bomb explosion.

The mosque belonged to the Saudi interior ministry and the 14 dead were all anti-riot police employed by the ministry.

So far no one has taken responsibility for the attack.

A bomb attack in May that killed 21 people at a Shia mosque in Saudi Arabia was claimed by the Islamic State of Iraq and Syria (ISIS), an extremist group that has called for the destruction of all Shias in Saudi Arabia.

Last month, the Saudi government arrested 431 people, accusing them of conspiring to carry out suicide attacks on mosques.

Saudi Arabia has also been bombing Yemeni Shias in Yemen since last March in support of the Yemeni government headed by president Hadi, currently in exile in Riyadh.