Nurses in Hamadan staged a sit-in on Tuesday June 30 to protest the non-payment of their wages and their lack of job security. 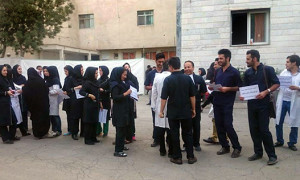 The Fars News Agency reports that the head of Medical Sciences refused to meet with the protesters and has declared their protest “illegal”. Habibollah Mousavi Bahar also said, however, that he will look into their demands.

The protesters reportedly closed down Kashani Boulevard in Hamadan.

Nurses staged a similar sit-in last month and they say their demands are not being acknowledged.

Reports indicate that the nurses are highly critical of how they are treated in the workplace and some have been complaining about threatening language and a lack of appreciation for their expertise.

Iran is facing a shortage of 80,000 nurses, and more than 1,000 nurses are reportedly leaving the country for better working conditions in other countries.