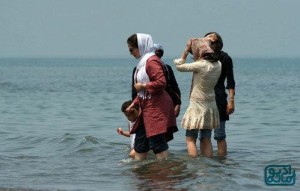 The report adds that the month of June was one average one degree higher all across the country.

Zarif to return to Tehran from Vienna