Zarif and Kerry meet in Vienna

Iranian foreign minister met with his American counterpart on Saturday June 27 for about 90 minutes in Vienna. 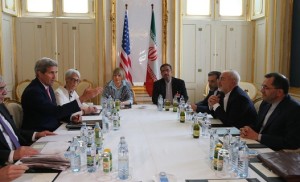 Reuters reports that the two met three days before the deadline for finalizing the draft of the agreement on the nuclear disputes both sides acknowledging the difficult days ahead.

Kerry said there are difficult issues ahead and the parties had to work hard. Mohammd Javad Zarif said it is necessary to get ahead with the drafting of the agreement.

Zarif had said earlier upon arrival in Vienna that if the other party is willing to recognize Iranian people’s rights and does not make excessive demands; they are certain to reach an agreement.

Abbas Araghchi a senior member of the Iranian negotiation team had said earlier that main parts of the final agreement have been already drafted.

There has been some reports that the deadline may be July 9 and not June 30.