Plane trees in Tehran are losing their leaves at the beginning of summer due to temperatures above 40 degrees, Tehran city hall reports. 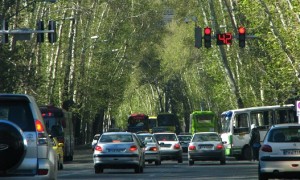 Shahrvand reports that city officials are proposing more frequent watering of the trees to protect them from stress.

Tehran also has severe air pollution, which according to experts is also putting severe strain on the trees.

Recent reports also indicate that the large number of motorcycles that travel the streets of Tehran cause eight times more air pollution than other motor vehicles.