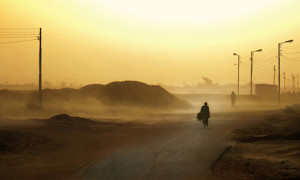 IRNA reported on Thursday June 25 that the concentration of dust particles is four times the acceptable level.

Kermanshah had seven days of heavy dust particles in March.

Khuzestan Province in western Iran has also been seriously affected by the dust storms that restrict breathing and severely reduce visibility.