Millions of people across India gathered to mark the first International Yoga Day by engaging in mass yoga sessions, but reports indicate that the celebrations triggered tensions in some part of the country. 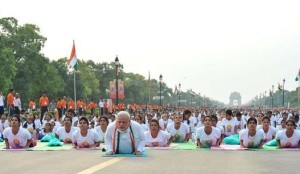 In New Delhi, the session began with a speech from Indian Prime Minister Narendra Modi, who had petitioned the UN to recognize yoga with an international day. He tied the day to the promotion of peace and harmony among all human beings.

While Modi took part in the mass yoga session himself on Sunday, the government support for yoga was seen by some as a promotion of Hinduism at the expense of India’s other religions.

In France, thousands of people in white with yellow yoga mats participated in a mass yoga session under the Eiffel Tower. Similar sessions were held in Beijing, Seoul and New York.

Yoga has gained widespread popularity in Iran, and a Professional Yoga Association was recently established. Many yoga classes have opened up in well-to-do areas of Tehran and Iran’s other major cities in recent years.