Workers’ representative Mohammadali Mirzai was killed in an accident with a coal trailer during labour protests in Zarand, Kerman, after police shot tear gas into the crowd. 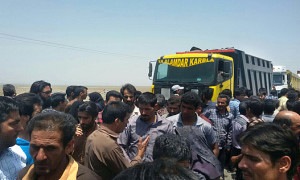 ILNA reported on Tuesday June 16 that more than 350 workers at the Madanjoo Company in Zarand staged a protest by blocking the road, after spending three months in a state of limbo with no work.

Eyewitnesses report that police threw tear gas into the crowd in order to disperse the workers, and as a coal trailer tried to force its way through the protesters, it ran over Mirzai, who had been temporarily blinded by the tear gas.

Officials have yet to release the news; however, unofficial reports indicate that the governor’s office has held a special meeting to discuss the matter.

The workers persisted in their protests despite the incident and were only convinced to leave the site after a justice department representative promised that their demands would be addressed within the next two weeks.
The workers are demanding that either the mine reopen or that they all be placed on employment insurance, which the company has been refusing to do, saying the workers are only on contract and, therefore, are not entitled to insurance.