Iran’s interior minister says there has been no change to the ban on women entering stadiums to watch sports events and the prohibition will be enforced. 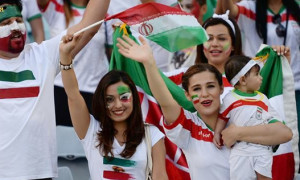 ISNA reported on Monday June 16 that according to Abdolreza Rahmani Fazli, no new directives have been issued regarding women attending sports events in stadiums, and the authorities will continue to deal with the matter as they have in past.

The statement comes after Shahindokht Molaverdi, the president’s advisor on Women and Family Affairs, announced two weeks ago that the ban on women in stadiums had been lifted and women should have no problems entering stadiums for the next game of the volleyball championships on June 19.

Molaverdi’s statement, however, triggered widespread threats from the extremist group Ansar-e Hezbollah, which threatened in a public statement to stage a “bloody resistance” against women trying to enter stadiums. Senior clergy hardliners also spoke out against the change and warned that it would threaten Islamic values.

The pressure from hardliners appears to have been strong enough to reverse the Rohani administration’s efforts to lift the ban.
Last week, 481 activists wrote an open letter to the interior and sports ministers as well as the head of the police to support the right of women to enter stadiums in the country to watch sports events.