Hardliners to work against lifting of ban on women in stadiums

After years of debate over the attendance of Iranian women at sports venues to watch athletic events, and recent announcements by the administration that the ban against their presence is now lifted, extremists in the Islamic Republic establishment have begun a campaign to exclude women from entering sports stadiums. 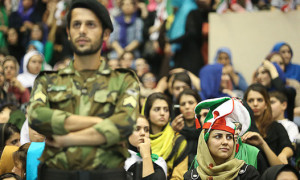 The Mehr News Agency reports that the Friday Mass Imam of Varamin, Ayatollah Mahmoudi Golpayegani, says: “Women in stadiums is not an appropriate legacy for Imam (Khomeini) and our martyrs.”

He added that members of the clergy have often expressed concern about the presence of women in sports venues and the “inappropriate socializing” that results from such permissiveness.

He urged the administration to seek the opinion of the clergy before taking any major decisions on the matter.

Shahindokht Molaverdi, the president’s deputy on women and family affairs, reported last week that the directive to allow women into stadiums has been executed and she promised that women should not have any problems entering the stadiums on June 19 to watch the World Volleyball championship games.
Meanwhile, the extremist group “Hezbollah Nation” has issued a statement saying it will mount a “bloody confrontation” against the presence of women in Azadi Stadium in Tehran.