Shahindokht Molaverdi, the vice president of Women and Family Affairs, is pushing to include a date on Iran’s official calendars to focus attention on the abolition of child labour. 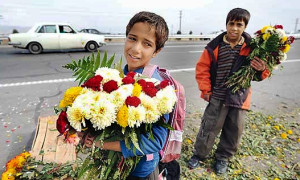 IRNA reports that Molaverdi called on all government offices to take this step as an effective way of promoting the prohibition against child labour.

June 12 is registered on many countries’ calendars as a day to mark the Abolition of Child Labour.

Molaverdi said such an initiative would focus the public’s attention on the the issue and the need for children to attend school and continue their education.

Molaverdi maintained that there are no official child labour statistics. However, a public health research report last year indicated that 30 percent of children engaged in work do not attend school and over 31 percent of them are between the ages of 9 and 11.

Child labour puts children at a higher risk of physical and psychological abuse as well as other health risks.