Iran’s most famous ancient site, the ruins of Persepolis, is being threatened by lichen. 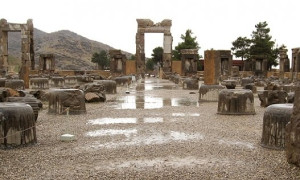 The Mehr News Agency reports that more than 100 kinds of lichen have been identified in Persepolis, while 10 years ago only 65 kinds were found.

The lichen consists of slow-growing fungi and algae that absorb the minerals of the rocks they grow on, gradually diminishing those rocks.

The growing number of lichen is destroying the engravings on the Persepolis stones.

Experts indicate that acid rain combined with the climate of the region is the main cause of the growing lichen and they have criticized National Heritage Department for failing to protect the site.

Persepolis was the capital of the Achamenid Empire dating back to 515 BCE. It was registered on the UNESCO list of World Heritage sites in 1979.