Despite efforts by the Islamic Republic establishment to present the anniversary of the passing of Iran’s late leader as a day of public mourning, Iranians are using it as a day for leisure and travel. 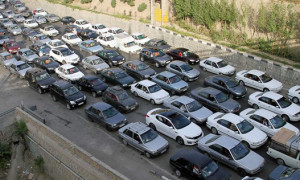 It’s especially true this year as the public holiday falls on Wednesday June 3, creating a long weekend up to Saturday.

Roads leading to the north are reportedly experiencing heavy traffic as people travel to the Caspian seashore and other getaways.

The heavy traffic on those northbound roads has forced President Rohani’s parliamentary deputy to cancel his official trip to the northern province of Mazandaran. He announced that he will not be able to make it to the ceremony he was scheduled to attend due to “severe traffic on the roads”.

Ayatollah Khomeini passed away on June 3, 1989, and each year, a ceremony is held at the tomb of the late leader of the Islamic Republic.