Iraqi Prime Minister Heydar Al-Abadi has defended the cooperation his country receives from Iran in fighting against ISIS forces.
Al-Abadi said in a television interview that Iran has supported his country in facing the threat of ISIS. 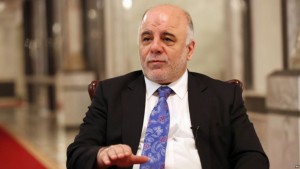 He referred to the collaboration between Iran and Iraq as “necessary”.

The U.S. and its Arab allies in the region are concerned about Iran’s growing influence in Iraq.

However, Heydar Al-Abadi stressed that the fight going on in Iraq is in effect an effort to remove threats to the Persian Gulf countries.

Iranian Qods force leader Ghassem Soleymani, who is leading Iran’s efforts in Iraq, has accused the U.S. of “partnership in conspiracy” and “a lack of will” to fight against ISIS.

Soleymani was quoted as saying after the takeover of Ramadi by ISIS forces last week: “Mr. Obama! What is the distance between your bases and Ramadi. You establish yourself with the excuse of supporting the people but then do nothing when people are being killed. What do yo call this?”

In the most recent cooperative effort between Iran and Iraq, Shia militia forces under Iranian support will help in an effort to take back Ramadi. Reports indicate that Sunni tribes will also be present in these operations.

ISIS calls on Saudi youth to rise up and kill Shias