The Iranian president says the elections to be held next March for both Parliament and the Assembly of Experts must be legal and transparent. 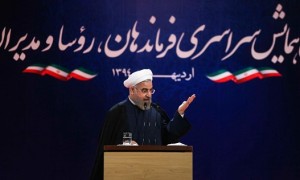 Hassan Rohani said on May 30 in a speech to officials from the interior ministry: “Elections cannot be held without competition, and elections that are not free are no longer elections.”

He added that the administration should be in no way even appear to support a candidate because even the appearance of bias will compromise the legitimacy of the elections. He went on to say that the criteria for refusing candidates cannot be based on rumours or accusations.

The Guardian Council has often been criticized for arbitrary criteria in denying the eligibility of candidates.

Rohani stressed that no cost should be spared in order to guarantee the transparency of the elections.

Young man could soon be executed in strange crime case