The Islamic State of Iraq and Syria (ISIS) announced on Friday May 29 that it was responsible for the bombing of the Shia Mosque in Saudi Arabia today that left three people dead. 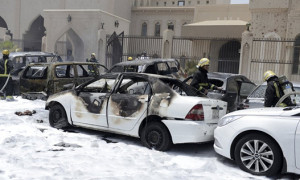 In a statement on Twitter, ISIS said that “Soldier Caliph Abu Jandal Aljzravy” carried out the attack, adding that “he managed to accomplish his missions despite severe security measures at the mosque”.

The suicide attack near Imam Hussein Mosque was carried out in the city of Demam in eastern Saudi Arabia.

On Friday May 22 during mass prayers, another Shia mosque in Saudi Arabia was bombed in al-Qatif Province, leaving 21 dead.

Iran has condemned the attacks on Shia mosques in Saudi Arabia and has called for the prosecution of the perpetrators.

ISIS has announced that Saudi Shias face many dark days in the future.