Air strikes on Yemen by the Saudi-led coalition left 80 people dead on Wednesday May 27 in the capital city of Sanaa and near the border with Saudi Arabia. 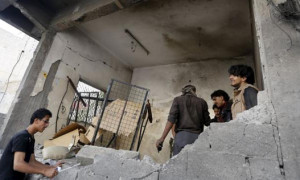 Reuters reports that this was the deadliest day of bombings since the air strikes began in March.

Fighters and the coalition fleet also targeted Hadida Port, which is currently under Houthi control.

A Hadida city official told Reuters that a naval base was targeted along with two Yemeni warships, one of which, the Balqis, has been destroyed.

The report indicates that coalition warships were targeting government buildings.

Air strikes in northern Yemen, which is considered to be under Houthi control, left 40 people dead, most of them civilians.

Following the bombing of the northern regions, Sanaa was bombed leaving 40 dead and 100 wounded, according to the Saba, the Yemen News Agency.