After more than 30 days of strikes, a number of workers at the Safa Pipe and Rolling Company in Saveh have been terminated. 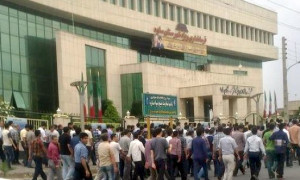 ILNA reported on Saturday May 23 that the number of fired workers has not yet been confirmed but it is somewhere around 10.

Workers report that most of them are on a “firing” list because they took part in organized labour activities.

The workers went on strike to back up their demand for four months’ worth of unpaid wages and 16 months of insurance premiums that were not paid on the workers’ behalf.

The workers had previously asserted, on a petition bearing 300 signatures, that the employer has held their unpaid wages hostage, forcing them to work like slaves.

Last year, 10 other workers at Safa factory were fired during labour strikes