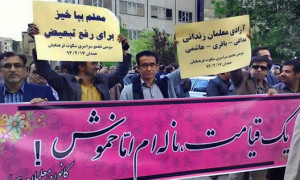 This is the third time in the past two months that teachers have participated in silent protests across the country.

Today’s protests included a gathering of more than 3,000 teachers from Tehran and Alborz provinces in front of Parliament demanding the resignation of the Minister of Education, fair wages and the release of jailed teachers.

Rights groups report that in response to the protests, a number of prominent teacher activists have been summoned and pressured by the authorities.

Teachers are among the lowest paid public employees in Iran and they have become highly critical of what they describe as discrimination.