Iran has slammed Saudi Arabia and its coalition forces for refusing to let its plane land at Sanaa Airport, calling their actions are “inhumane” because the plane contained “humanitarian aid consisting of food and medicine for the people of Yemen”. 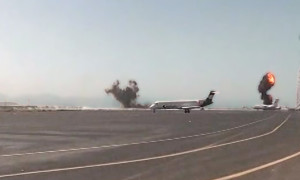 ISNA reports that the spokesperson for the foreign ministry issued a statement on Wednesday April 29, saying the actions of the Saudi military planes were “utterly inhumane and spiteful”, stressing that the plane was carrying aid sent by the Red Crescent.

Saudi coalition forces announced that they carried out air strikes on a Sanaa Airport runway on Tuesday April 28 to prevent an Iranian plane from landing in Yemen.

Iran stressed that the actions taken by the Saudi forces amounted to the inappropriate treatment of a non-military plane. Iran urged international aid organizations to provide the Yemeni people with the necessary aid that it was not able to deliver on Tuesday.

Saudi Arabia accuses Iran of supporting Yemen’s Shia forces with military aid, an allegation that has been categorically denied by Iranian authorities.

Iran has, however, consistently called for an end to the bombardment of Yemen and called for peace talks between all the involved parties.