Members of 10 labour organizations together with scores of retired teachers gathered in front of the Iranian parliament on Tuesday April 28 demanding better pay and benefits. 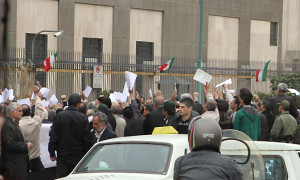 ILNA reports that protesters are also calling for the release of jailed labour activists and teachers.

Two labour activists, Jamil Mohammadi and Jaffar Azimzadeh, who organized a petition that was signed by 40,000 people demanding improved work conditions, have been in jail since last year. MPs have reportedly promised to follow up on their case and secure their release; however, so far nothing has been done.

Mohmmadi and Azimzadeh were arrested during protests last May Day in front of the Labour Ministry. Mohammadi has been sentenced to three and a half years in jail and Azimzadeh to six years. Azimzadeh is also banned from political and media activities for two years.