Hundreds of construction workers from the Ahwaz City Train project have been on strike for two days to protest that their wages have gone unpaid for five months. 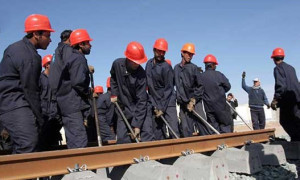 ILNA reports that workers from various sections of the project have stopped work, saying the contractors have failed to pay them for the past five months, blaming “a shortage of financial resources”.

Management has reportedly told workers that if they are not satisfied with the current situation, they can receive half of their back pay upon quitting their job.

The striking workers have announced that they are willing to return to work if they receive at least three months’ pay.

Workers from the Ahwaz City Train project have struck on several occasions in the past three years to protest repeated delays in the payment of their wages.

Women’s magazine shut down for reporting on ‘White Marriage’

Police to crack down on luxury vehicles after Leader’s comments