Protests grow over film of stray dogs dying in agony

The killing of stray dogs in Shiraz has triggered widespread protests across Iran and they continued today, with large groups of animal rights activists in Tehran gathering in Pardisan Park, across from the Department of the Environment. 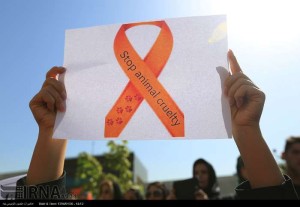 Protesters wanted the department to identify and prosecute whoever killed the dogs.

Earlier, a film on social media showed stray dogs in an unidentified location being injected with a liquid identified as “acid”. The dogs appear to die after a long stretch of pain and agony following the injection.

The Fars News Agency reported on the film, saying “contractors in the suburbs of Shiraz”, the capital of Fars Province, were receiving “15,000 toumans” from a government body for every dog corpse.

The head of the Fars Province Department of the Environment told the Mehr News Agency that it has filed a complaint with the judiciary, which has launched an investigation.

In Shiraz, people gathered in front of the municipal buildings on Sunday April 19, also demanding accountability for the actions depicted in the film.

Massoumeh Ebtekar, the head of the Department of the Environment, has reportedly met the crowd and reported that some clues have been gathered, but Shiraz City officials deny any involvement in the matter.

According to IRNA, the Department of the Environment has certain regulations regarding wildlife, but there is a legal vacuum for matters regarding dogs and cats, and this shortcoming needs to be remedied.

She stressed, however, that the Department of the Environment is an advocate for animal rights and it will “do everything in its power to clarify this issue”.

Protesters are demanding punishment of the dog killers and support for the establishment of shelters and vaccination programs for stray dogs.

Divorce on the rise in Iran, marriages in decline