More than one hundred laid-off workers from Dorood’s Farsit Factory, who had arrived in Tehran from Lorestan to bring their protests to the capital, spent the night in front of the Ministry of Labour buildings and began their third day of a sit-in on the morning of Wednesday April 15. 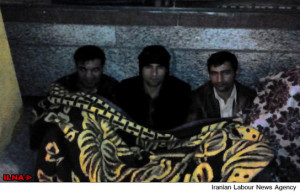 The workers are holding negotiations with the ministry and they claim Fars Holdings management is not showing any flexibility regarding the workers’ demands.

ILNA reports that the workers have been gathering in front of the Ministry of Labour since Monday. The report indicates that last month, the factory laid off one hundred workers and announced that it would be able to turn a profit with the remaining 260 workers. However, now it is claiming it will no longer continue operations and is planning to close down.

The workers demand that the factory reopen or that they receive adequate severance payments.