An Iranian Airbus had an engine explode while taking off from Ataturk Airport in Istanbul. The pilot managed to stop the plane and evacuate the passengers while the engine was in flames, and no lives were lost. 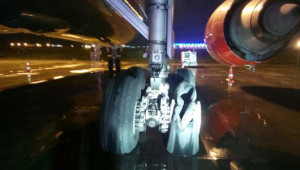 Turkish media report that a Qeshm Air airplane was involved in an accident and the news was also confirmed by Mehr News Agency.

The plane was leaving Istanbul for Tehran and as it was picking up speed, the engine exploded, sending debris onto the runway.

Flames leaped out of the right engine and the tires were punctured, but the pilot managed to bring the plane to a halt.

The plane was evacuated and the passengers continued on their journey in another aircraft.

In recent years, Iran has seen an increase in aviation accidents. Western sanctions against Iran have led to a depleted air fleet, which is considered the main cause of the rising number of air accidents.