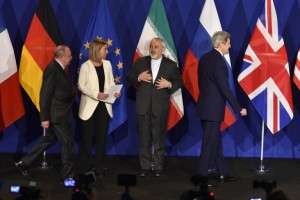 Iran and the 5+1 announced on Thursday that the final draft of the agreement will be written on the basis of the solutions reached today.
The parties announced that Iran has committed to limiting its enrichment programs in exchange for lifting sanctions. This was confirmed in a press conference by John Kerry, the U.S. Secretary of State.

Nuclear fuel will be removed from Iran’s reactors, while the Fordo nuclear plant will be used as a nuclear physics research centre and Natanz will remain a nuclear enrichment site.
The Wall Street Journal says the agreement provides for 25 years of supervision over Iran’s nuclear program.

According to the negotiated solution, 95 percent of Iran’s enriched uranium will either remain at low grade or will be transferred out of the country, and Iran’s enrichment capability and the number of centrifuges will be reduced to two-thirds of what it was before the negotiations began.
Iran has accepted unannounced inspections of its facilities by the IAEA, and representatives of the 5+1 will be at the enrichment site in Natanz.

Mine workers in Yazd sentenced after protests