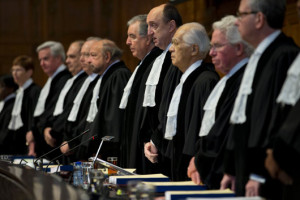 In a ceremony on Wednesday morning in the Hague, the International Criminal Court recognized the Palestinian Authority as its 123rd member.

Saeb Erekat, a Palestinian politician, said in a speech marking the occasion that this is a “historic day for Palestinians.” He had said on Tuesday that the ICC has already started an “investigation into Israeli war crimes in the Gaza Strip, the West Bank and Jerusalem, in addition to its illegal settlement construction and expansion activities,” adding: “We will conduct all practical moves directly after Palestine is officially declared an ICC member on Wednesday.”

In August of 2014, the UN launched an investigation into whether war crimes had been committed during this conflict, which triggered criticism from Israel.

Palestinian Foreign Minister Riyadh Maleki said the Palestinian nation has been waiting for such a day and “every Palestinian who has suffered discrimination and injustice now feels that there might be something out there in the world that resembles justice.”

The International Criminal Court has only issued three orders in the past 13 years. Israel is not a member of the court but the state of Israel and its citizens can be prosecuted under the ICC authority.