Media have published letters of Niloufar Bayani, an environmentalist, who has been sentenced to ten years in prison over national security charges, detailing her torture including sexual harassment in Iranian prisons. Iranians have taken to social media to express their outrage.

Iranian judiciary spokesperson, Gholam Hossein Esmaili told the reporters that Bayani is convicted of “cooperation with the hostile government of the United States” and that a court of appeals has approved the initial sentences of ten years in prison and payment of fines.

Bayani has revealed in several letters to authorities in Iran, including to the Supreme Leader, that her interrogators tortured her, and she has been subjected to physical violence, sexual harassment, and psychological abuse while detained.

BBC Persian has published parts of Bayani’s letters detailing her abuse in Iranian prisons for the first time on Tuesday, February 18, after prison sentences were upheld against Bayani and several other environmentalists.

The brutality of Bayani’s treatment in prison has outraged Iranians on social media driving response from Hassan Rouhani’s administration.

After revealing these letters, on Wednesday, February 19, Iranian Vice President Eshaq Jahangiri said he was not aware of the letters. Still, he promised to raise the issue at the next cabinet meeting.

He said that he will assign people to talk to the head of the Iranian judiciary, if necessary.

Intelligence Organization of the Islamic Revolutionary Guard Corps, the arresting body who is responsible for the arrest and use of excessive violence including sexual violence against Bayani does not answer to the President’s office in Iran. It is a powerful independent security branch of IRGC who only answers to the Supreme Leader of the country.

In the letters from prison, Niloufar Bayani talks about the treatment she has received from the security branch of IRGC that is notorious for its approach towards dissidents, political prisoners and civil activists in Iran. Bayani described how the interrogators of IRGC told her that they have permission from Hossein Taeb, the head of the organization, to force her to make false confessions with “whatever means possible.” She has been forced to write false confessions and she writes that the judge sentenced her to prison based on those forced confessions.

According to those letters, she has been tortured with physical and psychological violence, and the interrogators threatened her with sexual assault.

Niloufar Bayani who at the time of her arrest was a program manager at the Persian Wildlife Heritage Foundation is a former McGill University research assistant and alum, a Columbia University alum, and former project consultant for UN Environment. She is among a group of environmentalists and conservationists who were arrested in Iran with espionage and national security charges in January 2018. – one of whom, died under custody under suspicious circumstances.

Bayani, in her court sessions, told judge Salavti, the presiding judge on the case, that has been threatened with an injection of an empty syringe.

Kavous Seyed-Emami was announced dead by suicide while being held in prison on February 9, 2018. No one has been held accountable for Seyed-Emami’s death.

Bayani’s letters have become public after an appeal’s court upheld the prison sentences against environmental activists.

BBC Persian who has published Niloufar Bayani’s letters has not indicated which statement comes from which letter. Niloufar Bayani has written separate letters to Iranian Supreme Leader, Ali Khamenei, Sadegh Larijani, the former head of the judiciary, and other authorities as well. There is also the text of her defense at the court of Judge Salavati. that describes the tortures she has endured and the confessions she has been forced to make during interrogations.

The Nine environmentalists all of whom were colleagues of Niloufar Bayani including Amir Hossein Khaleghi, Abdolreza Kouhpayeh, Houman Jowkar, Morad Tahbaz, Sam Rajabi, Sepideh Kashani, Kavous Seyed-Emami and Taher Ghadirian were detained in Iran in January 2018 and their cases have been treated with utmost secrecy by Iranian Judiciary. None of their trials was public and little information became available to the media on their cases except for the official narrative that charged them with espionage and national security crimes. 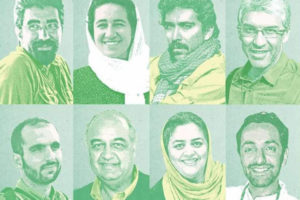 Iran Parliamentary Election Explained: who is Competing, Why Does it Matter?