Narrating the Stories of those Killed in Iran’s Gasoline Protests

Mothers whose children the Iranian security forces have killed in the November protests hold their pictures in their hands.

The recent nationwide protests in Iran started on 14 November against the decision of the National Iranian Oil Products Distribution Company (NIOPDC) to increase gasoline prices. A week long protest led to crackdown and authorities arrested 8000 protesters. 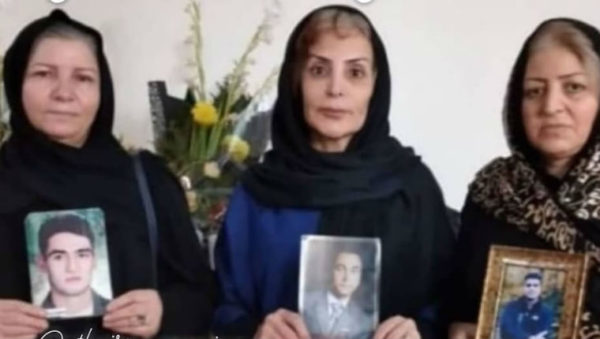 The Iranian officials have not been transparent about the number of those killed by security forces in the gasoline protests. During the unrests, some local officials occasionally mentioned a few cases, however there a refusal on part of the state to announce the numbers.

According to Amnesty International, at least 304 people have been killed. In a report published Monday 23 December, Reuters said that an unnamed official within the Iranian ministry of interior have told them that at least 1500 people have been killed. Speaking at a news conference at the State Department on December 5, U.S. Special Representative for Iran Brian Hook also stated that the US government sources believe that the Iranian government forces have killed more than 1,000 protesters.

The job of doing body counts and documenting stories of victims has been left to the media and human rights organizations outside of Iran with numbers adding up every week.

A team of journalists at Zamaneh Media have also been working to verify cases of killed protesters. Farzad Seifikaran is a Zamaneh journalist who has been working tirelessly in the last weeks on these cases.

Seifikaran says that journalists and human rights activists so far have identified the name and identity of around 160-200 of the victims. Zamaneh has independently confirmed more than 160 names of those killed. Seifikaran has also documented the accounts of relatives, loved ones and friends of a total of ten victims of the gasoline protests.

In talking to families, witnesses, local, and confidential sources, Seifikaran is narrating the story of mostly young protesters, who lost their lives. In his reports, Seifikaran tells us who the protesters were, how they were killed, and the consequences that their families face in the aftermath of their loved ones’ death.

He noted that the numbers of those that were killed are being updated frequently, and this process continues, so in the future, we might have more names and even more verified cases.

Seifikaran said in the past the protests usually happened in big cities and the capital. During the November protests in Iran, we witnessed protests in smaller towns as well. For example, in the Southern province of Fars, in Sadra city, a significant number of protesters were killed. Sadra is a newly established city in the northwest of the city of Shiraz, with a population of 90 thousand.

Seifikaran has also documented cases of protesters killed in small cities such as Mallard, Eslamshahr, Quds city, Shahryar, and GhalehHassankhan.

At least 20 children are among the protesters killed in these protests.

Earlier this week, sixteen mothers whose children were killed on street protests called for Iranians to observe a minute of silence for the victims on December 26, 2019.

“We, the mothers of grief-stricken families who have lost our children in the path of freedom and justice during the past 40 years, call on the noble and freedom-hearted people of Iran to observe a minute of silence on December 26… to pay respect to those who fell victim in November.” the statement said

Seifikaran said it was difficult to stay objective during this investigation and not to get emotional:

“The whole process was difficult, but writing a sad story of a young son, husband, or brother who is suddenly killed is not easy. You have to talk to the families who lost their loved one, the sisters who lost their brothers, a mother who lost her only son.”

Narrating the story of pain and sorrow of the families is a difficult job that stays with you day and night and for long. It is so difficult not to get emotional and tell the stories.

“Harrowing testimony from eyewitnesses suggests that, almost immediately after the Iranian authorities massacred hundreds of those participating in nationwide protests, they went on to orchestrate a wide-scale clampdown designed to instill fear and prevent anyone from speaking out about what happened,” said Philip Luther, Middle East and North Africa Research Director at Amnesty International.

As a journalist in exile, Seifikaran had challenges in reaching inside Iran fact-checking witnesses’ statements. As Seifikaran said, telling the story most accurately was his priority:

“In the first stage, we checked with the human rights organizations such as Amnesty to see if they could verify the names and cases. In the second phase, we try to contact families and close relatives, including parents, siblings, or spouses of the victims; we are also looking at the evidence including the footages and videos from the incidents.”

He gave details about the process of fact-checking: For example, we have a video of the time that Pooria Naserikhah is being killed. In this video, we can see he has been shot in his head, and he is on the ground dying. This video is confirming the story that people close to him told us. Or the case of Amir Hossein kabiri, we can see the footage of the moment after he was shot. “His sister told us the doctor in the ambulance told family that Amir Hussein’s hands were still in his pocket, and in the video, we saw a young man with his hands in his coat’s pocket that has been shot and is on the ground,” Seifikaran notes.

One of the cases he documented was the case of Borhan Mansornia, 28 years old veterinarian that was shot in Kermanshah; he was alive until two days after he was shot, and we have his story with details the way he told his family in those two days. So Seifikaran had the first-hand story in this specific case.

Seifikaran noticed a pattern in the cases he documented for Zamaneh:

“One of the most significant things that I noticed while I was working on this project was that it seems many of those who were killed were a target of a sniper or sharpshooters. They were being shot from behind on the head or the chest. They are mostly young, and most of them are between 20-35 years old.”

In the age of rising social media and alongside fake news, Seifikaran had another challenge for fact-checking. Like all other places, there were a few journalists and news outlets which intentionally or unintentionally published hoaxes and disinformation about November protests.

“Unfortunately, we encountered several false materials. There were lots of factual errors and even false information. In reporting the names of the victims and the location of their death or footages attributed to the killings. The same goes for the news on the ones arrested. In some cases the stories of those killed, injured or arrested were mixed. Or the details of the deaths were not accurate. In a few cases, the death tolls were exaggerated in some cities.”

As Seifikaran asserted, the number of casualties and the viciousness and excessive use of force and firearms in the crackdown of the November protests were even more than previous unrest in recent years in Iran.

It is reported that at least 900 banks, 3000 ATMs, 200 gas stations, hundreds of shops, and governmental buildings were set on fire.

The Iranian officials are not transparent about the wave of arrests during and after the unrest, but it is reported more than 8000 people have been arrested.

Among the citizens who have been arrested are journalists, students, and human rights defenders, including minority rights and labor rights activists. Some of those arrested have been released, but many remain in detention, and there is not that much information on their charges or how they are being treated.

Borhan Mansornia: a Kurdish Veterinarian Killed in the Gasoline Protests in Iran

A Child, a Single Mom and a Bookseller: the Stories of those Killed in the Gasoline Protests of Iran

About the Movie “It Was 5 in the Morning”

The Latest on Neda Naji, the Last 2019 Labor Day Detainee