Word on the Street after Moderate’s Landslide Win in Iran

Iranian people came to streets to celebrate the victory of Hassan Rouhani, the moderate candidate in Iran’s twelfth presidential election. Rouhani secured 57% of the 40 million votes Iranian cast. He defeated the hardliner candidate Ebrahim Raisi, a former notorious prosecutor and jurist, who received 38.5% or 15.7 million of the votes.

Zamaneh has reached a number of Iranian citizens via phone asking them about the outcome of the election, how they think Rouhani’s second term will play, and if their demands will be responded to. 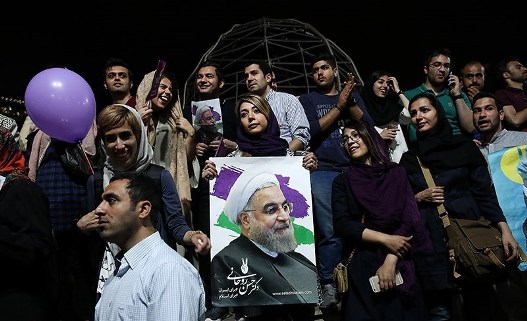 Rouhani took to Twitter to thank his supporters writing “The Great nation of Iran, you are the true winners of this election. I humbly bow down before you. I will honor my promises to you.”

The celebrations for the victory in the presidential election started on noon Saturday 20th and continued to Sunday 21st – the day in which the results were out for the City and Village Councils election. The reformist camp won most seats in Tehran, Mashhad, Tabriz, and other urban centers’ city councils.

In Tehran the reformist and the centrist camp that is close to Rouhani won all 21 seats on the council. They had put out a list of recommended candidates called the Omid List (the List of Hope) and had asked voters to only vote for that list.

Watch a woman and a man dance to the revolutionary song of the Green Movement called “My Schoolmate” – after Rouhani’s re-election:

The List of Hope defeated conservatives and hardliners that enjoyed a fourteen year reign of the very wealth city council and mayor’s office.

The next fight is to replace Tehran’s mayor, Mohammad Bagher Ghalibaf, a conservative who was running against Rouhani in the presidential election but dropped out of the race to endorse Ebrahim Raisi.

The city council members that the Tehranians elected have the power to replace the current mayor and it is likely that they will replace him.

Among the winners of the City and Village Councils election all across Iran there are more than 420 woman; a favourable outcome for Iran’s women’s movement activist who were campaigning for more political participation and leadership of women. The votes are still being counted and not all the names of women elected are out.

Maneli a culture and communication specialist who was arrested after the 2009 disputed presidential election yells into the phone “it is just like 2009, only we are all happy, this is not a Rouhani’s victory. It is ours, we are winning this battle. He is moving forward with our names, our slogans, our demands, our blood, just a shell of a politician. We are behind this.” 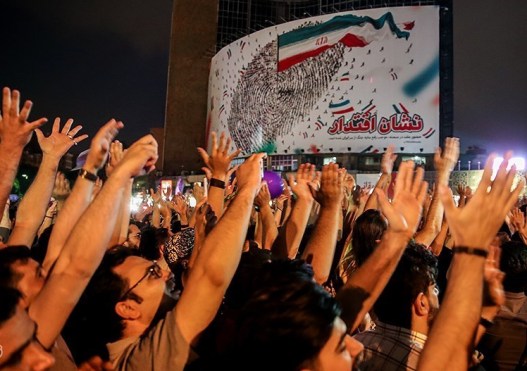 I can hear the celebrations in the city of Karaj in the background and I ask Maneli “do you think Rouhani will fulfill the promise of freeing Green Movement leaders from house arrest?”

“No,” she says. “It is Khamenei that put them under house arrest not Rouhani.”

The leader has praised the voter turnout in the 2017 election and has thanked the presidential candidates but he has not congratulated Rouhani for winning the election. The clash is clear, the voters that voted for Rouhani do not all represent the group that submit to Khamenei under any circumstances.

Maneli has a message for Khamenei: “we have to be loud and clear every time our demands are being heard. Every time we say we want our leaders free, khamenei knows that we are threatening his legitimacy and he better know that we are.”

Maneli’s husband, Saeed works as a contractor for an Iranian oil company. He does not agree with his wife that this election is about the Green Movement: “that movement is long gone. People have real problems, real economic problems, many of the university educated youth are coming to the job market and are unemployed. This is not some revolutionary vote for the past, it is for the foreseeable future.”

Saeed graduated from university ten years ago. it took him five years to secure a full time contract job. He had to work as a part-time inspector engineer and as a part-time taxi driver for five years. Even now he has to be away from his wife 14 days a month as his job is near the oil rigs in south of Iran.

“We are still living in Maneli’s father’s basement. We cannot afford our own place. And we have a baby coming. These are the real problems.” Saeed says.

In Mashad the story is different, the home city of the hardliner candidate Ebrahim Raisi did not fully support him. A very religious city where the shrine of the 8th Shiite Imam is located is living a cultural divide: the modern westernized Mashahdis do not get along with the religious ones who are part of the establishment and are limiting their freedoms. Including the freedom to attend concerts that are banned all together in the city of Mashhad.

Watch a street party in Mashhad after Rouhani won the election:

Nazanin, studying education management in Ferdowsi University of Mashhad in not from this city but has married a Mashhadi: “My in-laws have all voted for Raisi. They are a religious wealthy family from Bazar (the central market) who love and respect Khamenei (the supreme leader) and think Raisi represents their values. I cannot stand this; voting as a religious cult! I don’t get it.”

Nazanin and her husband have voted for Rouhani. They both agree that the nuclear deal and the relief from economic sanctions has had a positive impact on their lives. “Our infant son needed a medicated formula that was often imported – it was like a medication. I could not find it anywhere in Mashhad during the sanctions. We felt so helpless. I found it in Tehran in the black-market, ten times the usual price.”

MirHabil on Twitter, however has another story. He is a green movement supporter who has voted for Rouhani but his father is a manual labourer who at the end of the day voted for Raisi. MirHabil is offended that many Rouhani supporters are mocking the likes of his father.

On Twitter some conservative users agree with MirHabil that reformists are stuck up and elitist with no respect for boundaries of a Muslim culture. There are many tweets from Qom, Mashhad, Zanjan, Tehran where users are annoyed by the mixed gender dancing in the streets and the noise. 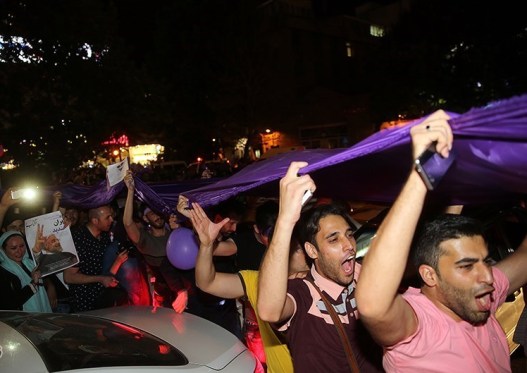 “The noise in killing us,” says Hassan who studies in the seminaries in Tehran. He is not willing to tell me who he voted for but he says it is the fear of war that really is the common ground between the two camps: “who wants war? No one. They are both scared of war. One is voting for Rouhani to prevent it the other is voting for Raisi so that he can fight it well with the help of the Revolutionary Guard.”

Rouhani is promising to stand against war by advancing diplomatic relations.

Hashemi who is active on social media and is from the city of Tabriz does not agree with Hassan that there is a common ground. He has voted for Raisi, despite the fact that most of his city supports Rouhani.

“I voted on an ethical ground” he says, and he is disappointed that Raisi has not won: “Did you see Rouhani’s unethical rants during the presidential debates? I am not voting for someone who is disrespecting all religious Iranians by calling us backward and extremist.”

Hashemi talks about Rouhani’s background working for the intelligence sector and the office homeland security within the government: “This is a war and if anyone knows Rouhani’s past they know that he was once a conservative serving security and intelligence positions. He is not a reformist. He is just using the existing cultural and political split to score in politics. I find this unethical and dishonest. He is just after power for economic corruption”

In a televised address, Rouhani said he will serve all Iranians not just the ones who voted for him, but also made sure that his mandate of continuing international diplomatic relations is highlighted: “The Iranian nation has chosen the path of interaction with the world, a path which is distant from extremism and violence.”

One of Rouhani’s campaign slogans was “we will not go back” suggesting that Iran will go backwards with Raisi. However it also meant that “we will not go back to the time of sanctions and economic isolation”. Rouhani is promising an increase in foreign investment.

Mehran who is active on Twitter writing about economic issues has a fancy degree from a western university but has chosen to go back to Iran. I ask him if he is hopeful for Iranian economy: “The investors want to invest; especially from Europe. The banks are finding it a risky investment. The challenge is to convince the banks to loan money to Iran.”

Hassan, the seminary student is also hopeful. He is pleased at Rouhani’s previous term and thinks that Rouhani is on the right path which is serving the public: “one good thing his health ministry did is that plan they started to subsidize health care costs for those with less income. My older sister was in an accidents. Thank God she is doing better. She went through three surgeries. her husband is just a penniless student. Rouhani’s plan covered it. She is still receiving treatment.”

Some Iranians boycotted the election. I call my uncle who has not voted in 30 years. He has lost a son in Iran’s notorious Evin prison; my cousin was executed as political prisoner when he was 23 years old. Ebrahim Raisi the hardliner judge and Rouhani’s rival was member of a special commission known as the “death committee” that ordered the executions of my cousin and 4000 or more prisoners.

I ask my uncle: “did you not want to vote against this man that killed your son?” He reads me a poem and says “in a system that twenty years past my son’s killing those who are responsible are still honoured as political choices, I only have one choice: to stay home and await my death.”

My cousin and his wife who live with my uncle have voted and are happy. They have a different perspective: “listen, can you hear, people are chanting and dancing, this is a blessing. This is the future of my son and my little daughter” my cousin’s wife, Vida says.

“I don’t want my children to live a life of eternal mourning like we did,” my cousin Nader says. “Our children have the right to live a happy life and I will work towards that – whatever is the cost.”

His wife, Vida says if Rouhani can keep the status quo, no threat of war, no sanctions, no major economic depression,just a little freedom of internet, I’ll be happy.”

Polls Open in Iran: the Rivalry of Moderates and Hardliners