Prison work for inmates in Iran is a chance to briefly escape the inexorable walls that prescribe their daily lives for years on end or perhaps for the rest of their lives. However, prison workers have become slaves in ventures solely aimed at replenishing the pockets of prison officials.

Workers work six days a week for six hours each day but only get paid about 17 USD per month. Their products including garments, textiles, furniture, and handicrafts are sold in the black market with “made in china” labels. 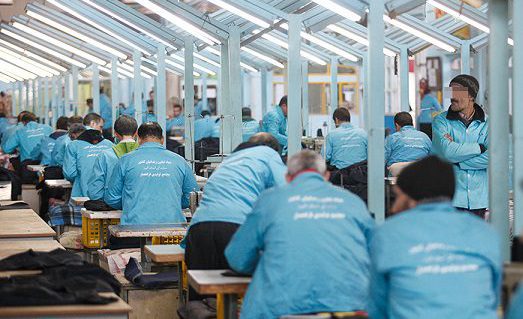 Many of these prisoners are incarcerated for charges such as bad cheques, failure to pay the lump sum alimony often stipulated in Iranian marriage contracts, and various other financial misdemeanours. However their impulse to work in order to get a relative degree of respite from prison restrictions has become a source of jobbery for prison authorities who have no regard for the law and the defined legal frameworks for work, income and fine payments.

According to Regulations of the Prison Organization, as long as there are no employment bans in the sentencing, prisoners can participate in employment training programs commensurate with their background, age, gender, nationality, type of offence, length of sentence, mental health state, personality, skills, education and expertise; i.e. they can engage in paid work.

However there are strict restrictions on the extent of such trade; therefore, prison authorities often inspect prison cells to confiscate large accumulation of cigarette packs or other similar goods leaving prisoners without means to secure their nutritional, medical or hygienic needs.

Prison workshops and work centres are where the most official forms of employment for inmates is offered but it is also where exploitation of prisoners’ labour reaches its peak.

Work available to prisoners entails trades such as textile and furniture production and the fruit of their labour sometimes disappears in the market with “Made in China” marks to prevent any form of accountability regarding their profit. Workers work six days a week for six hours each day but only get between 28 to 50 thousand toumans (about 17 USD) per month.

17 USD per month is only 5 percent of the minimum wage set for workers last year which is already considered a sentence to a life of poverty for all workers.

Meanwhile there are no insurance benefits to assist the workers in case of injury to get back to work. Losing the ability to work is therefore synonymous with losing their meagre wages as well as the privilege of daily escape from the strict confines of their prison life.

*This report is part of field work from Iran. The findings are based on interviews with prisoners who have experienced the work-ward. Read the original report in Persian here.

Coup or a gift from Allah?