Iranian women were excluded once again from entering a sports stadium to watch their favourite team compete in Iran’s Premier Football League. 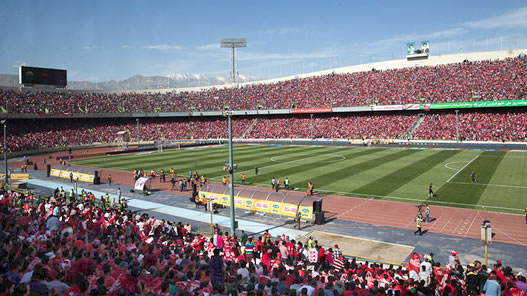 The Varzesh 3 sports news website reports that a woman tried to pass herself off as a man to enter Azadi Stadium on Friday May 13 to watch her favourite team, Persepolis, compete against Rah Ahan, but she was discovered by security personnel and prevented from entering the venue.

Reports indicate that she claims to be 15 and says she entered the venue three weeks ago to watch Persepolis win against Esteghlal.
In the past, some women have managed to get into stadiums dressed as men to watch their favourite matches.

The exclusion of women from sports spectacles was the theme of the Jafar Panahi film, Offside, which won the Berlinale’s Silver Bear award in 2007.

Despite some attempts by the Rohani administration to end the ban on female spectators in stadiums, ultra conservatives in the Islamic Republic have dug in their heels on this issue.