More than 100 Iranian MPs have called on the president to reconsider the Joint Comprehensive Plan of Action drafted after the nuclear agreement was reached last summer between Iran and the 5+1 and to resume Iran’s nuclear activities within the framework of the NPT as in the past. 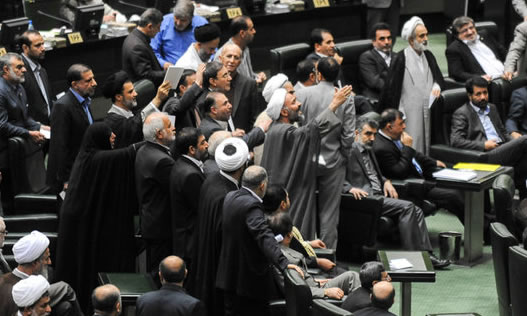 The Fars News Agency reports that the warning to the president by 103 MPs was read in Parliament. The president is called upon to “resume all legal activities in the framework of the NPT, to take appropriate and reciprocal action in terms of foregoing commitments in the Joint Comprehensive Plan of Action in case the U.S. refuses restitution of Iran’s stolen assets and continues to threaten the country and persist in maintaining international sanctions.”

In April, the U.S. Supreme Court upheld a court ruling that 1,000 victims of terrorist attacks in Lebanon can seize $2 billion from Iranian assets frozen by the U.S. The ruling has spurred opponents of the nuclear agreement in the Islamic Republic establishment.

President Rohani and his administration have denounced the ruling and say it goes against international law.