Iran’s Supreme Leader has spoken out against Iranians travelling to destinations such as Antalya in Turkey and called for a ban on the advertisement of such trips. 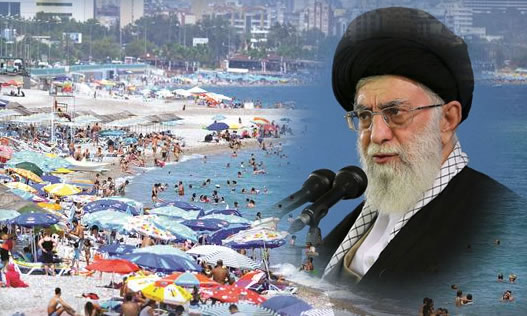 The Javan News Agency reported on Monday May 2 that Ayatollah Khamenei has described Antalya, Turkey as a place of “vice and debauchery” and branded travelling to this city as “sinful”.

The Javan News Agency, which is linked to the Revolutionary Guards, goes on to add that the leader of the Islamic Republic has expressed his hopes that trips to “religiously forbidden (haram) locations” are no longer promoted in the country.

According to an earlier report by Iranian tourism expert Babak Nematpour, 80,000 Iranians travelled to Antalya in March of last year but the number dropped to 40,000 this year due to the recent turmoil in Turkey.

Antalya remains one of the chief tourist attractions for Iranians travelling abroad.

Artist released from Evin as lawyer had predicted