Iranian actress Hediyeh Tehrani and 16 other environmental activists were briefly arrested for participating in a protest at Tehran’s Laleh Park in support of animal rights. 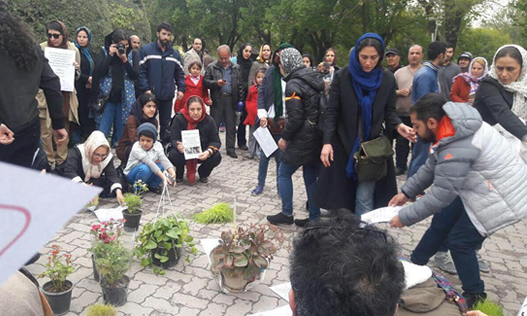 The Reporters Club reports that Hediyeh Tehrani and the activists were arrested on Friday April1.

Meanwhile, the International Campaign for Human Rights in Iran reports that according to an unidentified source, the detainees are supposed to appear in court on Sunday April 3 to face their charges.

The report adds that the officers checked the mobiles of the activists while they were being held in detention.

The police and plainclothes forces arrived at the park at around 3 PM, according to one protester, and dispersed the crowd after arresting a number of the participants.

“We were about 70 people and we were walking toward the park pool to take a picture with the hope that the new year will prove the government to be more active in upholding animal rights, but that’s when the plainclothes people came and began attacking us and forced some people into a big white van and drove off,” the source reports.

Hediyeh Tehrani issued a rallying call on her Instagram last Wednesday urging people to join her in Baharestan on April 1, the thirteenth day of the Iranian new year, when Iranians usually go out into parks and natural settings to mark the return of spring. Tehrani had called the gathering a chance to celebrate the day of nature.

Reports indicate the detainees were released on Friday after a few hours of questioning.