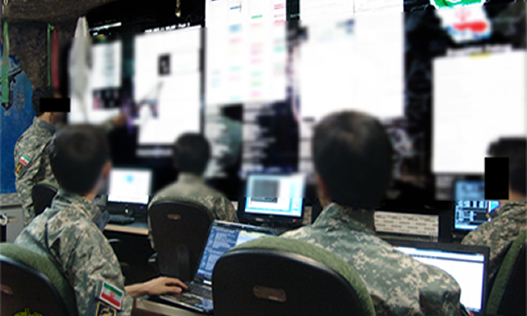 The Ghasam Website, the centralized system of Tehran’s Revolutionary Guards cyberspace presence, reported on Tuesday March 15 that they have 2,500 active websites linked to Basij bases.

Mansour Amini, the deputy commander of the Iranian Revolutionary Guards cyberspace, told a ceremony celebrating the IRGC cyber experts that: “The IRGC Cyber Battalions have been organized in the same way as the Ashura Battalions.”

“At each Basij resistance base we have formed a cyber battalion,” Amini said. “These bases are no less than the Ashura or military battalions in terms of presence and organization.” He added that some bases might even have two battalions.

He added that Basij Press, the official IRGC news agency, has more than 2,500 reporters.

Mohsen Kazemini, the Tehran IRGC Commander, called on the IRGC cyber force to use every virtual tool to “attack the enemy”.

He used the names of prominent military operations carried out by the IRGC in the Iran-Iraq War of the 1980s, rallying the cyber experts to facilitate similar operations.

The IRGC cyber headquarters began its operation 10 years ago and expanded it after the 2009 presidential election and the widespread street protests that followed it. Yadollah Javani, the head of the political bureau of the IRGC, has been quoted as saying that they have organized the fifth-largest cyber army in the world.

Meanwhile, the IRGC has also increased its media presence and in addition to Basij Press, it is closely involved with the Tasnim, Nasim and Fars News Agencies. The Javan daily is published under direction of the IRGC political bureau. The Ofogh News Channel is also reportedly closely linked to the IRGC, despite the Guards’ refusal to confirm the connection.

The IRGC cyber headquarters is highly active in the identification and arrest of internet users expressing themselves in the cyber world. In recent years there have been several reports of individuals being arrested by IRGC officers for their activities on the internet.