Six Iranian migrants have sewn their lips together in Calais to protest the mass eviction of migrants and the destruction of their camps in northern France. 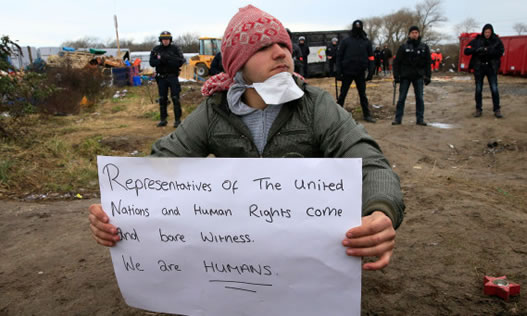 The Associated Press reports that the protests came three days into the state operation to dismantle the makeshift camp on the outskirts of Calais, where migrants hang around trying to slip through the English Channel into Britain.

Reports indicate that some of the migrants stood on the roofs of their shelters to stop the demolition.

According to AP, the Iranians held signs calling on UN representatives to visit their camps.

Last month, a French court ruled that large swaths of the camp could be legally dismantled.

While the state says approximately 800 people live in the areas being dismantled, aid workers say at least 3.000 people live there.

French authorities reportedly say the migrants can move to nearby heated containers or to temporary welcome centres to revisit the possibility of asylum in France.