The February 2016 elections revealed once more that the openness of the internet defuses policies of censorship and repression to a certain degree. Iranians have used the internet as a tool in the service of social resistance since the elections of 2005. 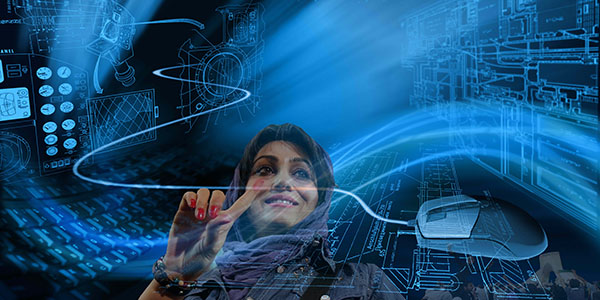 Hamid, a 33-year-old seminarian from Qom Seminary, believes the use of cyberspace in the elections is amazing. He says all factions benefited from the space provided by the internet but he believes that for reformists as an opposition group, cyberspace has been of vital importance:

“I believe for both factions and but especially for the one with the lesser opportunities, cyberspace was of vital importance. Simply by circulating the lists and video clips, they managed to consolidate their forces as a viable alternative. They used it to dissuade those who were thinking of boycotting the elections and also solidified their support. Without Telegram, the conservatives would not have suffered much; they have other tools that the reformists do not have. Reformists were not even allowed to publish (former reformist president) Mohammad Khatami’s statements about the candidate lists in official media outlets.”

Shahin, a 38-year-old English major who runs a small publishing house in Tehran, says one of the characteristics of the cyberspace news circulation during the elections was to provide a more organizational and party-oriented view of the elections:

“I was mostly following the parties rather than individuals though the internet. Perhaps because of what I was getting through cyberspace, I was persuaded to go to the ballot box and vote for people I did not know but whose political affiliations were familiar to me.”
Mehdi, a 30-year-old Azeri student living in Tehran who was also active in the reformist campaigns in 2013, says: “Any event that happened in real space would only get to the people through cyberspace. A wave was created in cyberspace that brought back many who had turned their backs on the ballot box. We had nothing in real space to rally people to participate in the elections. Videos, images, news etc. all got to people through the internet. Even the list that we recommended to the people was sent to them through their mobiles. Voters mostly had their eyes on their mobiles in voting stations. All of the coordination efforts by campaign headquarters were done through Telegram.”

Mahmoud, a sailor and labourer in Abadan, says:

“If I had not found my preferred list in cyberspace, I would not have had any other access to it. To tell you the truth, at first I was not going to vote at all.”
Mohsen, an independent journalist in Tehran, spoke at length about the influence of cyberspace on the current elections. He believes election campaigning started very early in cyberspace and many voters were persuaded to go to the ballots through cyberspace advertising.

“People were afraid that their votes would not count and, like other times, despair and a lack of confidence were holding people back. Then the issue of disqualifications exacerbated the despair. It should not be forgotten that a significant portion of the public still did not vote. It is most noteworthy that cyberspace was exploited to draw the most advantageous result from the participants and the minimal number of favourable candidates. After the widespread disqualifications, creating focus and a sense of shared interests was fruitful. Reformists and their supporters managed to create waves of news and promos through cyberspace on social networking sites like Telegram to get the best results, and they managed to persuade and give hope to a large portion of the public in large cities.”

From Cyberspace to Street Space
The use of cyberspace in Iranian election campaigns is not a new development and it probably dates back to the presidential election of 2005; however, it was in 2009 that the internet was pushed beyond election campaigning and was used as a tool to promote street protests, allowing election protesters to organize their protests more effectively and causing serious concern for the regime. This history was perhaps the reason why several government organizations were tasked with monitoring the activities of Iranian internet users in the months leading up to the latest elections, with repeated statements of concern regarding the use of the internet in election campaigns and possible protests.

Statistics regarding internet users in Iran are varied. Some sources indicate that by 2015, 40 percent of the population used the internet. Sources close to the Islamic Republic released some statistics regarding the impact of the internet on the elections, which indicated that 10 million Iranians maintained an active presence on the internet. In addition to administrative services, they use the internet to maintain an active presence in political, social and intellectual forums. The report maintains that the number of users went from two million in 2013 to 10 million in 2015.

The Internet at the Service of Protest and Resistance
These statistics reveal a tsunami of Iranians turning to the internet. With the popularity of smart phones increasing daily, there is no doubt that Iranians will be using the internet more and more.

Recent history shows that as more Iranians turn to using the internet, protesters and dissidents are provided with greater persuasive advertising tools to have a real impact on events such as the elections. Therefore, it would appear that the proven power of cyberspace to promote hope among the public to change the political situation of the country through political participation will cause the Islamic regime greater problems in dealing with cyberspace in future elections.