Counsel for the detained Khatoonabad copper mine workers announced on Saturday February 13 that 23 of them have been released on bail. 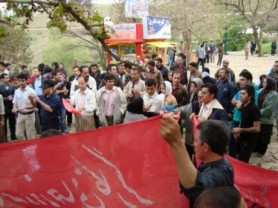 ILNA reports that the workers were released in recent days, and each has had to put up bail of 50 million toumans.

Samieh Mahmoudi, the workers’ counsel, reported that the remaining five soon will be released.

Khatoonabad workers staged a protest after the company introduced a new test and terminated 130 workers, citing their failure to do well enough on the test.

Scores of workers were arrested following the protests, which triggered support for the workers from unions and labour activists across the country.

Journalist goes without food, water as jailers press for confession