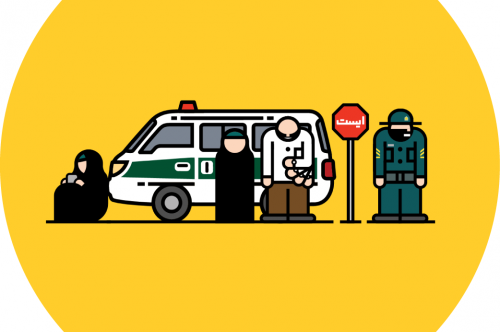 For many Iranians, avoiding encounters with the morality police is a daily concern, and the developers of Garshad have finally addressed this concern in a practical way.

They refer to a social reality as stated by the Police Social Deputy, who said in 2013 that close to three million people had received “warnings” from the morality police. And these warnings reportedly came with overt “humiliation and disrespect”.

The developers ask: “Why should we be humiliated for our most obvious right, which is to choose our outfits? Websites and social media are full of photos or videos of innocent women being assaulted or dragged by the morality police. Police has reported that in one year they have elicited 207,000 written commitments while sending 18,000 people to court. Police should provide security for the people and not be a source of fear for them.”

The message goes on to say that they have thought of a peaceful way to reclaim some of their rights with minimum risk. The app developers stress that the success of the app depends on how widespread its use becomes. As the morality police move around the city, the only way to keep up-to-date intelligence regarding their location is by more and more citizens reporting their whereabouts.

The app reportedly comes with a complete user’s guide, and one characteristic of the App is that locations reported more that six hours in the past become lighter in colour to indicate the time lapse. It is also indicated that the app is only available on Android devices.