Tehran`s Friday Mass Imam condemned the attack on the Saudi embassy in his Friday sermon and attributed it to “infiltrators”. 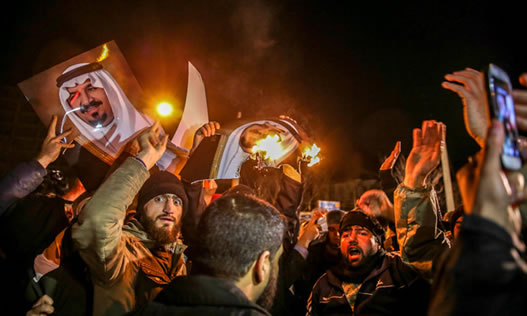 Mohammad Emami Kashani made a reference on Friday January 8 to the attack on the Saudi embassy in Tehran: “This has been done by infiltrators with the aid of some ignorant people; these people are criminals.”

He added that a group was behind the attack, saying: “They wanted this thing to happen and throw the ball that had fallen onto the Saudi field back onto Iran’s field and then cut off diplomatic relations with Iran.”

Iran’s Supreme Leader has spoken on several occasions about the danger of “enemy infiltrators”, and conservative groups in the country have echoed his warnings.

The Saudi embassy building was set on fire last Saturday night following protests in front of the building in reaction to the execution of Sheikh Al-Nimr, a Shia cleric and outspoken critic of the Saudi regime.