The Tehran Prosecutor announced today the arrest of 40 people involved in storming the Saudi Arabia embassy in Tehran last night. 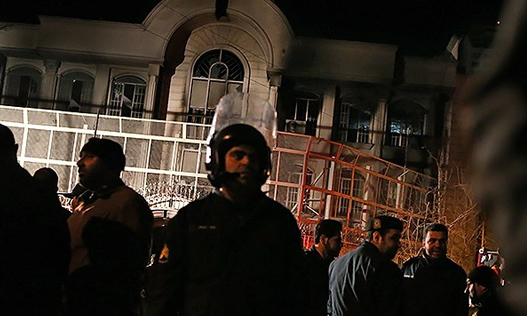 ISNA reported on Sunday January 3 that Abbas Jafari Solatabadi said “investigations to identify the perpetrators” of the attack on the Saudi embassy are ongoing.

The Saudi embassy building was set ablaze on Saturday night following protests in Tehran against the execution of Sheikh Al-Nimr, a prominent Saudi government critic and Shia leader.

The prosecutor stressed that orders to identify and arrest the perpetrators have been issued and efforts are underway.

The Saudi government announced on Saturday December 2 that it had executed 47 people for terrorism-related charges. The execution of Al-Nimr ignited a wave of protests in the Shia world, especially in Saudi Arabia and Iran.

Iran calls on Saudis to answer for Shia cleric’s death