Pollution lingers over Tehran and other major cities

In addition to Tehran, which has been suffering under severe pollution for the past 13 days, reports indicate that Tabriz and Isfahan have also been experiencing conditions of low air quality. 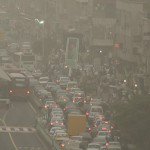 ISNA reports that according to a Department of the Environment spokesperson, Tehran air quality is hazardous for vulnerable groups such as seniors, individuals with respiratory and heart conditions, and children.

The report adds that weather reports indicate winds will begin to blow on Thursday afternoon, which will slightly improve the air quality.

Recent reports indicate that air pollution has increased the number of deaths in the city, and a city councillor has referred to it as the “silent killer”.

In addition to Tehran, Isfahan has also resorted to shutting down schools for the past week due to air pollution.

The administration has formed an emergency task force to tackle the problem of pollution in the capital, and the head of the Department of the Environment has announced that it is engaged in studies to come up with “a comprehensive response and a way to prevent air pollution” in major cities in the country.